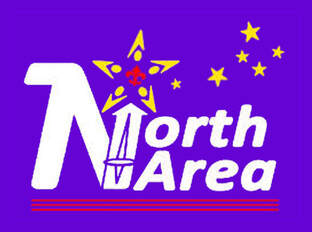 North Area was made up of Serangoon, Bt. Timah and Yishun District, and the symbol of the North Star was chosen to represent the area, complemented by the Big Dipper constellation in the background..

Emblazoned in the center, the North Star or Polaris forms the focus of the quest for knowledge, a journey of sorts embarked on by the Scouts to develop oneself and become a better person.

The Big Dipper constellation with its seven stars, therefore provides a fitting complement to point towards the North Star. In real-life, the Dipper assists wayfarers to seek out where North is and hence establish a clear sense of direction, and symbolically, acts as. a guiding lamp-post to the goal of Scouting Life.. Moreover, the seven stars represent the Scout Law and Promise, a constant reminder to uphold the Pledge the Scouts make when they were first inducted into the Scouting Fraternity.

Besides, the constellation revolves around the five aspects of the SPICES encapsulated in the five points of the Star, fulfilling the education objectives of Scouting, thus nurturing the Scout into a complete whole

The compass needle under the star recalls the leitmotif of the logo and serves as an insistent call to ensure the Scout stays unwavering on track, underscored by the three lines of Duty to God, Country and Self.

Washed by the colour purple, the logo hearkens to the roots of Scouting and the international character of the Movement, while ubiquitously known as the colour of Strength and Transformation, qualities we hold dear and expect of the eventual outcomes of a Scout.
Proudly powered by Weebly
​© 2021 The Singapore Scout Association. All Rights Reserved. | 1 Bishan St. 12 Singapore 579808 | +65 6259 2858 | C: Ms Norismawati | e: norismawati.ithnin@scout.org.sg